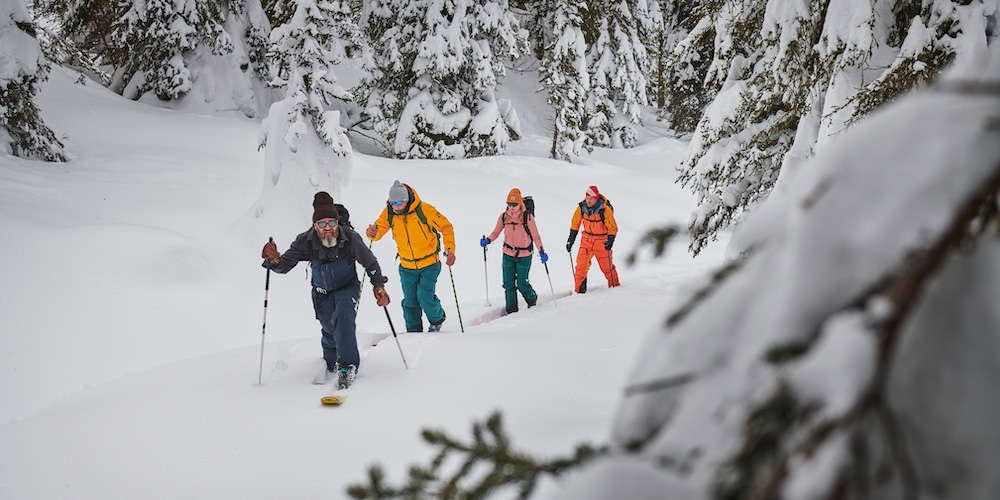 The winter buzz is here! We know all the gear we are getting in, we've tested it, and we've started to get the CCBC family geared up for the upcoming season. To help you narrow down the wide selection of boots, we've highlighted eight of our favorites. Check out the rundown below and see which boot is best for you!

Olympics 2026 anyone? For those who are in it for the uphill and want all out touring performance, there is no better option than a dedicated ski mountaineering racing boot. The two boots we are stoked on this year are the all-new Dynafit DNA boots and the updated Scarpa Alien 1.0.

The all-new DNA represents the next generation of Dynafit's much anticipated race boots. Offering 120 degrees of cuff articulation in an ultralight (810gs), stiff, carbon package, the DNA will likely be seen atop several podiums.

Our other favorite, is the redesigned Scarpa Alien 1.0. Building upon its storied past, the Alien 1.0 improves its comfort and skiing performance with a beefier tongue and larger gator. At only 785 grams, you may not even notice this boot on your feet.

Whether ripping high speed resort fitness laps or summiting high peaks, a boot that tours and skis with comfort and confidence is key. The Scarpa F1 LT and Atomic Backland Carbon are hard to beat.

Bursting onto the market last year, the F1 LT combined two of Scarpa's most successful designs into one boot. The result? A ski touring masterpiece that is comfortable, light, and more powerful than you'd expect.

The Atomic Backland Carbon features a tried and true design that provides the best skiing performance-to-weight ratio on the market. Featuring Atomic's memory fit shell, this boot is adaptable to a wide variety of feet. For the biggest missions in our backyard, the Backland Carbon is our staff's go-to.

When skiing performance and touring efficiency hold equal value, an all-mountain boot is the one ring to rule them all. The Dynafit Radical Pro and the Tecnica Tour Scout stand out with a great balance of performance.

A combination of two massively popular and game-changing boots, The Radical Pro features the Hoji-Lock system and an improved fit. At only 1525 grams and offering 60 degrees of ROM, big days are no problem for the most well-rounded ski touring boot.

For those seeking a traditional four buckle feel, the Tecnica Tour Scout has a familiar feel on the downhill and strides uphill with ease. The 120 flex is paired with 55 degrees of ROM in a 1360 gram package, letting you leave your friends in the dust on the up and down.

If you're traveling the galaxy far and wide for the biggest, baddest lines, these are the droids you're looking for. Focusing on all-out downhill performance while still offering touring capabilities, the Tecnica Cochise 130 and the new Lange XT3 130 LV are best in class.

The Cochise 130 is our favorite boot for ripping hot laps in the resort and occasionally venturing beyond the ropes. The stiffest boot in the Cochise lineup, this four buckle boot features Tecnica's 'T-Ride' walk mech that provides the best power transfer in the freeride game. Summary: the new Cochise represents our go-to hybrid boot.