A go-anywhere, do it all splitboard, the Weston Backwoods splitboard is the most awarded splitboard in Weston's lineup. This board rips in all conditions and busts over variable conditions. Lean into this board for more speed with stability. Sit back and surf it like a dream, or put it on cruise control and shift edge-to-edge effortlessly with the massive tip-to-tail taper. This board shreds snow around the globe for a good reason.

As a powder and freeride hybrid deck that prefers tree skiing powder, steep and deep. With its wide nose, strong camber, and snub tail, it's easy to hit the "oh-snap" button and get this board in control. Take this up the tallest mountains, the most prominent volcanos, or the tightest chutes and you will be psyching from the moment you drop in!

Its powerful poplar and bamboo core give it pop and strength to handle anything. Friends, ambassadors, and staff alike will agree that if you get to bring one board on a destination trip--this is what you bring.  The revolutionary shape by Weston makes the Backwoods splitboard the best-selling board in the lineup for a solid reason. You won't be dissatisfied with making the Backwoods your go-to splitboard.

Backwoods 160 Carbon Split
Rider: Male 5’10 185 LBS (Not including pack)
Boots: Phantom Atomic Backland Pro 27.5
Bindings: Phantom M6
Skins: Jones Nomad Pro
I decided to test the Backwoods Carbon 160 split and Ridgeline 162 split in the same 4 zones in Tahoe in early December. Generally for 3 of the 4 zones you start around 6600’ and summit at around 9000’. Early season brings variable and elevation dependent snow. With some storms and zones you can yo-yo the top ½ to 2/3 of the area, have lunch, and get the better snow at the higher elevations. This worked out great for testing these boards in great snow up top and difficult snow at the bottom.
The uphill. The first 800’-900’ were firm on the skin track, which is pretty standard for the skin track in this zone. I’m generally pretty quick to put on my Split Crampons around here as I’ve been humbled too many times. These days were no different. About 200’ before the bench the wetter “Sierra Cement” transitioned into classic blower pow on many of the early days.
I was a bit concerned with how a board with so much taper, and designed for Pow, would handle touring up steep, frozen hard pack shin tracks. I tried multiple different styles of kick turns and round turns. The board toured uphill great with the perfect toe piece placement giving you a slight upward angle as you lifted your foot. I thought the shape might prove difficult when following a established skin track but this wasn’t an issue, even when we encountered breakable crust.
The Ride. There was a ton of SWE and snow density changes within the upper snowpack between storms and during storms as well. The Backwoods did great in all of them. If there was one condition that it didn’t perform well on it was when we’d get it to the elevations where it rained on top of snow. It felt classically sluggish and slow in those conditions, but most of the boards I’ve been on in these conditions felt that way. It didn’t help this was in flatter terrain. On the lower elevation, variable frozen ice tracks I knew we would encounter I was pretty skeptical, especially for a carbon board and a hard boot set up. While this certainly was a standout as far as performance, no turning ice to pow here, I was generally impressed with how this tapered, carbon, stiff, set up was able to keep and edge and blast over the frozen used snow. It was significantly better then some of the other boards I’ve used in these same conditions. The board has great energy and dampening at higher speed traverses and holds an edge great. This is only the 5th carbon I’ve tried. I did not notice a big difference in torsional rigidity or overall stiffness in comparison to the solid non carbon version. I think that’s one of the best things about this board is you can demo or buy the solid version first then bring it to the backcountry. I’ve demo’d, rented, borrowed, tested, used, and worked on somewhere around 15-18 different split boards from 7 different manufacturers. Most boards were pretty good but had one area of needed improvement. The Backwoods 160 Carbon Split is now my go to board when I’m Guiding in the Snowcat. If I knew I was on a bit more variable conditions or with less snow I’d use the Ridgeline 162. You really can’t go wrong with either of these in the solid or split versions. They are backed by a 4 year warranty which from a guiding perspective is a great added luxury. I’m careful with my equipment but on it often. I’m confident on this board and highly recommend it, especially if your going to be on good snow

This board truly slay both the uphill and the downhill. I tour this board through icy skin tracks and set fresh tracks with ease. The ride down is killer in all conditions whether wide open or in tight trees! So fun!!

I bought the Backwoods in a 157 and LOVE IT! This board does it all. I have had the deepest/best days on this board. Taking it into the Tetons, it floats effortlessly in the deep stuff. The camber profile makes skinning up even icy sections a breeze. After work I take it up our local resort and shred groomers with it also. This board has never let me down. During spring time, I move my binders closer to the nose for easier jump turns and WOW does this thing charge. If your looking for a board that does it all, you can't go wrong with the Backwoods!!

T
Thomas S.
Do It All Split

I absolutely love riding my backwoods. Every time I go out I am continually impressed at how capable it is. Due to its shape, it obviously excels in pow. But it can do just about anything, I have taken it all over and continue to hold my belief that it can do anything very well. I have ridden everything from chest-deep pow all the way to board width couloirs in the San Juans. It kills it! 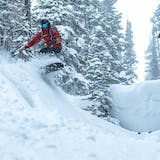 This boards slays...great float in pow, snap turns in the woods, and charges on groomers. No issue when you need to get switch either...well done Weston!

Took my new setup out yesterday and it was great fun! The folks at Cripple Creek were amazing. Knowledgeable and the prosses was easy. I was be using them in the future

Got to rip the Backwoods up Mt. YOTEI in JP. It is just an awesomely fun board, all around ripper. It is killer to carve with the camber profile under your feet and set back stance and gentle taper. It sprays huge sprays and stomps airs and cliffs easily. When you get a chance to let it run it absolutely floats down fall line and links big turns. It rides switch for big ol'butters, switch takeoffs or a break on tracks out. Also very fun on slush and spring corn for surfy slashes.

This is my favorite splitboard all winter especially for riding powder. I really love how quick you can turn this thing through tight trees. Which if you live in Colorado you’re usually riding in the trees quite a bit. This board does well in all conditions and has done great in steep couloirs as well as meadow skipping in deeper snow. The backwoods is a great board to have in the quiver and if you’re looking for some lightweight I’d recommend checking out the carbon version!

W
Will B.
All Mountain Split-Board

Been riding the backwoods for several years now and have nothing but good things to say. The board has great edge control, handles really well going through trees and other areas where quick responsiveness is needed. The set back stance gives a great feeling as the nose lifts and you glide easily down the mountain. This board has won several years and I feel each year Weston out does themselves and continues to build on such a stellar board. If you aren't concerned with riding switch, I cannot think of a more versatile, better board to ride.

M
Mark M.
Good for uphill, amazing in powder, a bit unforgiving up front but grips well on hard snow.

Cripple Creek got the board shipped to me in northeastern California in time for me to trek up to Mount Bachelor and experience the Thanksgiving miracle. Thanks guys. Skinning up Bachelor on a bluebird day, I honestly felt like I had my touring skis on. So for me the Backwoods is plenty light for the purpose, and feels durable. On the way down the untracked backside, it was a dream in the powder, and was effortless to turn even in the heavier, wetter snow lurking in the trees. A really great experience. Back on the tracked out frontside, I could tell that it is torsionally rigid and holds a firm edge on harder snow. The downside of that feature is that it also has a fairly stiff flex up front and feels a bit more unforgiving than I'm used to when going over irregular terrain. I'm 5'11" and 215 lbs and normally ride a 163 cm freeride board, so I went with a 167 cm for the Backwoods splitboard. With G3 universal skins and so much surface area, the skins never slipped at all. It was even easier to skin straight up the hill than I am used to with my touring skis, and the uphill position is balanced perfectly. The two halves don't seem to line up exactly when locked together (~1/8 inch off), but I can't imagine that having anything other than a cosmetic effect. I'm quite happy with the Backwoods splitboard so far and is a board that is really is great in the powder and trees but seems like it will also be good for corn cycles. 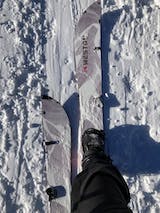 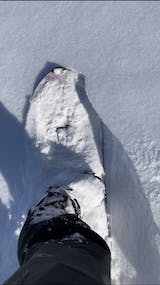 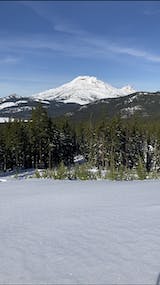